Click and read part 1, dude. You’ve come across an experiment in immersive storytelling, relying on the game mechanics of a popular tabletop wargame to frame a steampunk and fantasy story. Not fan fiction, just a different mechanism for deciding what happens as the general plot unfolds.

This is part 2, where the mystery of the black ruins deepens and first blood is drawn. Read the pdf for part 2 if you prefer that to the images below. Warmachine game 4 – pt 2

Before the fateful clash at the central wall, mysterious and terrifying statues suddenly appear…

Unfazed by the mystery and unable to investigate when slaughter awaits them, Cygnar entrenches for the Cryx assault, poised in a defensive cluster on the west and protected from Raider charges on the east. 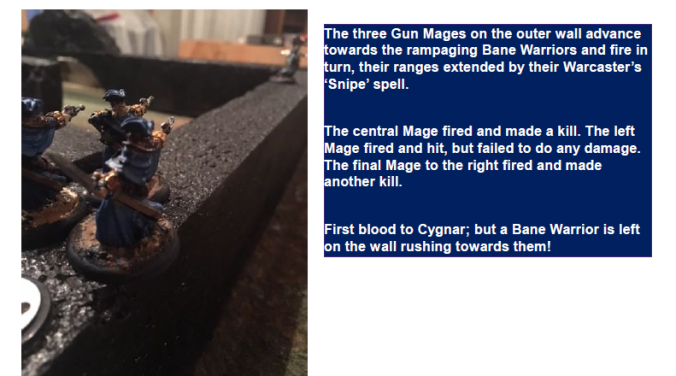 Undead Bane Warriors pass like ghosts through the wall and attack. Satyxis Raiders, magically enabled to do the same ghostly maneuver, make a surprise move and split their forces, four of whom attack the Stormguard from behind.

Another clash brews on the east side of the temple, with six Raiders and a Slayer only steps away from Cygnar’s most dangerous weaponry, and a rushing Reaper with its harpoon raised high atop the wall.

Honestly, I didn’t see the diagonal maneuver by the Raiders coming until it came. At this point, I’m excited to see that Reaper blast somebody from the top of that wall and haul them up for a beating. And maybe those Raiders have a chance to gang up and do some damage on the warjacks. We’ll see about that.

And what’s going on with those statues, by the way? A ruined temple split into two parts suddenly overseen by statues of hideous entities that appears from thin air? Crazy.

See you next time.